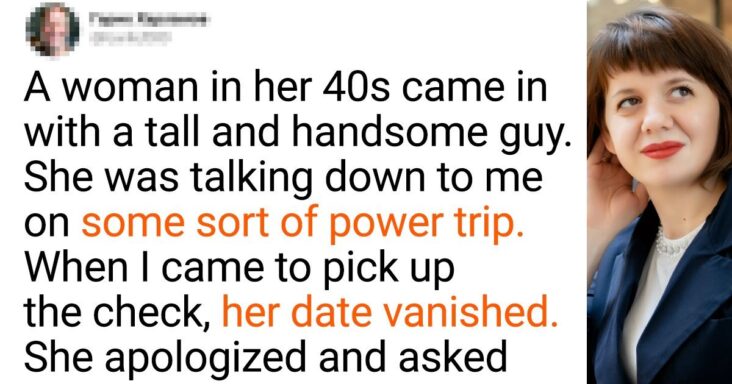 We’ve been reading stories from waiters and waitresses about the weirdest dates they have ever witnessed. This includes an overhear of interesting dialogue, or watching comical situations go down in front of them! We think these scenes deserve to become part if something award-winning movie because it would make for great entertainment. And some of the best stories from the viral reddit thread are below.

“I worked at a bar where like 50% of our business was from Tinder dates. This one time, 2 guys came in separately and sat at different tables by themselves, along the same wall. They were both facing the door and clearly waiting for dates. Eventually, a woman comes in, walks up to the closest guy, sits down and they start chatting. After ~5 minutes, the other guy, who is still waiting by himself, gets up and walks over to the couple. He says, “Hi” to the girl and is like, “Um aren’t you so-and-so? …I’m so-and-so, we were supposed to be meeting.” She was clearly flustered, lots of awkward laughter, and she gets up and goes with the other guy to the other table. A couple of minutes later the other woman shows up and sits with the first guy, and he tells her all about it.” – © frankylovee / Reddit

“I had these 2 people that were there on a first date. After the appetizers, this poor man got diarrhea and was going back and forth to the bathroom all night. There were only a few other people in the restaurant at the time so it was noticeable and they were chuckling every time he got up. I honestly felt so bad for the guy. ” – © RAM_592 / Reddit

“Not a first date but we did have a guy come into our steakhouse on a Saturday night at 7 PM with NO RESERVATION. He then told us on the spot that he was going to propose to his girlfriend. We had to seat them somewhere awful, it was right next to the bathroom, and when he got down on one knee, looking around nervously, absolutely no one noticed. He and his girlfriend kept waiting for the rest of the restaurant to see them and go quiet, or even clap for them, but not a single person noticed. She said yes, looked disappointed, and they went back to dinner as if nothing happened. They must not have minded too much because they came back for their one-year anniversary, this time he made a reservation lol!”-  © sophiegitt / Reddit

“I used to work at a sushi restaurant, and there was a girl who would come about once every few weeks with a different guy. Every single time, she’d order a portion of the same dish, which is like a rice-salad-sashimi bowl, and it was GIANT. I’ve only ever seen a handful of people ever finish the entire thing in one sitting. She would finish the whole thing (with CHOPSTICKS) and always ask for a spoon toward the end. It was always fun watching the guys look stunned when she finished. One day she came with this dude that ordered what she did, and when they both finished the bowl, they ordered another and split it. Wish they had ended up together, but she came back with a different guy a couple of weeks later.” –  © themerrypaek / Reddit

“I worked as a barista at a coffee shop with a dishwashing sink that brought you face to face with whoever was sitting at the coffee bar across from you. For some reason, so many people chose this spot for their first dates, so I would have to wash dishes and pretend I wasn’t literally on the date with them. One time, a person I knew was on their first date with someone and chose that cursed seat across from the dishwashing sink. Because we knew each other, we chatted a little bit and then, as if a partition raised between us, they began their date… but I still had dishes to do… So uncomfortable!”-© maybemaggot / Reddit

“Once, as a high school teenager, while waiting tables at a Mexican restaurant chain, 2 people on a first date came in. They seemed unable to converse. It was super awkward. Painful to watch. Well, at one point the woman asked for a refill of her tea. I dutifully went and got the pitcher and came back to fill her glass. While pouring, I literally dropped the entire pitcher, a full gallon, of sweet, sticky tea directly onto her. It went down her shirt. Her skirt. It was everywhere. She was completely and utterly soaked. I apologized profusely. I brought her out like 4,000 napkins. Her date was dumbfounded and probably thinking, “didn’t think this could get worse, but here we are.” Well, she cleaned up the best she could. And they ate their meals. And, magically, they began talking. They started looking at each other like a new couple looks at each other. They laughed. They enjoyed their food. She dried out. They left the restaurant an hour later, with her arm in his. They gave me the biggest tip I had ever gotten. Somehow, my idiotic, high, blunder, turned the worst first date ever into the best first date ever. ” – © AmishTechno / Reddit

“Just saw one on Valentine’s Day. The date seemed to be going very well, actually, not awkward at all. They talked non-stop, no lulls in conversation, they were laughing, carrying on, and just generally having a good time. In fact, another server and I were laughing about how obnoxiously loud they were. Then I heard the gentleman say “…and obviously, you’re not still married… right? Please tell me you’re not still married,” she said “well, actually…” and then things got VERY uncomfortable. It must not have been a deal-breaker because they stayed at the restaurant another hour until we closed, but they were very quiet for the rest of the night. Hardly spoke to each other at all.” –  © WhatOnceWas396 / Reddit

“As a bartender, my personal favorite was one where the guy showed up to meet a girl but left with another dude. The 2 people on the date showed up separately, had a cutely awkward first few minutes, and things went business as usual for about the first 30 minutes or so. Then a guy, let’s call him Frank, shows up and happens to sit on the barstool next to the dude on the date. Frank is a bro. Like a bro bro. I’m not totally sure how this happened, but Frank and the date guy start chatting and within minutes are full-blown bro-ing out. The rest of the “date” was largely the girl looking at her phone while the date guy and Frank had the time of their lives. On one hand, I felt bad for her but on the other, I was watching the best friendship form in real-time and it was kind of hard to be mad at that. After finishing her meal the girl said goodbye and got a taxi home. “© Thenegativeone10 / Reddit

“I worked at a higher-end restaurant. My first shift a woman in her 40s or 50s came in with a tall, and handsome guy no older than 30. Nothing wrong with that in my eyes, but all of my interaction with them was the woman talking down to me on some sort of power trip. She ordered ahi tuna, RARE. She sent back 4 separate plates (all too well done) to the absolute horror of her date. After the 4 plates, she sent the last one back and asked for a shrimp cocktail instead. When I brought the check, and when I came back to pick it up, her date was gone, and I don’t mean, went to the bathroom, all of his things were gone and he was nowhere to be seen for 30 minutes. She apologized to me and asked if I could take the ahi tuna (~$45 each) off of her bill. Told her to pound dirt. Not really, but my manager did. The next day she wrote a 500-word review about me, using my first name, on the restaurant’s Facebook page. My boss printed it out, framed it, and I still have it today.” –  © IDKimjusttheintern / Reddit

“I used to wait tables at a steakhouse. This guy used to come every weekend, sometimes alone, sometimes with a lady. He skipped a few weeks and came back on a Sunday with a new lady. I get his table and when I see him I greet him, “Hey, long time no see!” The death stare from the woman almost killed us both. They didn’t speak for the rest of the dinner… And I didn’t get a good tip that day.” © Boring-Jicama / Reddit

Do you have any interesting stories to share? Let us know in the comments! 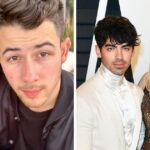 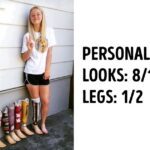